Exhausted, he falls to the ground. End of scene.

With yet another scene to follow, the second Intermission is looking a long way off. And where did all these little faeries and cupids and the Queen of the Wood Nymphs suddenly come from? Ah, yes.

The Don is dreaming. Kitri is his "Dulcinea" and she's in the guise of a five-star prima ballerina.

Thus, another dazzling solo. Well, what could be better? Especially for her fans?

The problem with perhaps cutting the scene, even for the sake of brevity, is that we would also miss the brilliant performance of Clara Blanco as the wing-ed "Cupid. And after the recent breath-taking apperance of Sofiane Sylve in Edward Liang's Symphonic Dances , I am not willing to forsake her solo as the "Queen of the Dryads"; not while she's sporting the biggest tiara in town. So, I guess the scene stays. And so will this production of Don Quixote. Tap here to turn on desktop notifications to get the news sent straight to you.

Photo, Erik Tomasson By the end of this scene, "Don Quixote" has wrecked a local puppet show and made an idiot out of himself fighting with a windmill. Help us tell more of the stories that matter from voices that too often remain unheard.

Social Justice. Donald Trump. Queer Voices. A stageful of ballet dancers pogoing in perfect first position to Hyperballad is a sight to see. Viewed as pure choreography, some sections may seem disposable, even random, but as a synthesis of dance, music and design it becomes far more than the sum of its parts. Instead, he communicates something of the transgression, yearning, mischief and magic at its heart. Working with an arranged score by Philip Feeney , Marston whittles her material down to around 30 minutes of pure dance. There is a superb chemistry between casting and choreography.

Sarah Van Patten is terrifyingly good as Zeena — her hands clawed, her spine rigid and her gaze steely with possessiveness and pain. Snowblind is the only literary ballet to feature in the festival, but some of the most abstract-seeming works carry an implicit theme or personal story. An intricately fluid, intimate quartet has four women recalling a time when they used to talk rather than text; while an affecting solo for Lonnie Weeks shows a man stranded in solitary anxiety, among a group of phone-transfixed friends.

Dance often works its deepest effects through the gaps and ambiguities of its language. 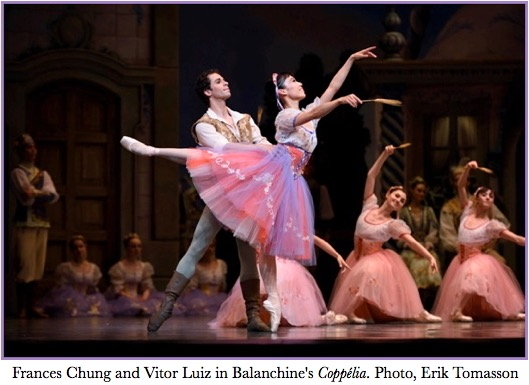 Freemantle as the young grandfather dances among his male friends with a slightly stilted jocularity. At the end, when Freemantle is left alone, dancing a strange, ragged duet with a three-legged stool, we glimpse the pain of the grandfather losing his mind and the choreographer trying to piece it back together. A homage to Picasso, it throws together sex, politics, cubism and Spain in a high-gloss spectacle of bull-horned lovers, flamenco and blood red lighting.

It is marvellously danced, however, as are all the works in the festival. Peck has a special genius for choreographing ensembles, creating surges and crosscurrents of dance that sparkle with brilliantly bevelled detail.

The heart of this beautiful ballet lies in the long, quietly ecstatic duet for Sarah Van Patten and Luke Ingham — a sequence of low lifts, gently delineated balances, and unexpected changes of direction during which the two dancers seem to move together on a single breath.